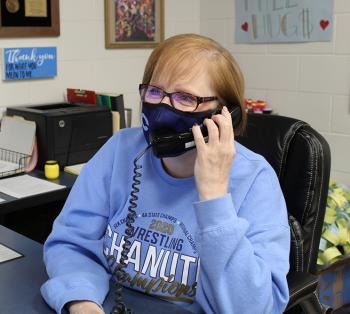 At the end of every school year, one employee of Chanute Public Schools is selected for a special district award named after the late Deborah “Debbie” Cummings.

Cummings began working for Chanute Public Schools in the Hutton kitchen and eventually became the Kitchen Manager at Chanute Elementary. She believed in the district’s Student’s First motto and exemplified it in her attitude, dedication and the pride she took in feeding the students of Chanute. She expected the same of all her kitchen staff if they wanted to work for her. 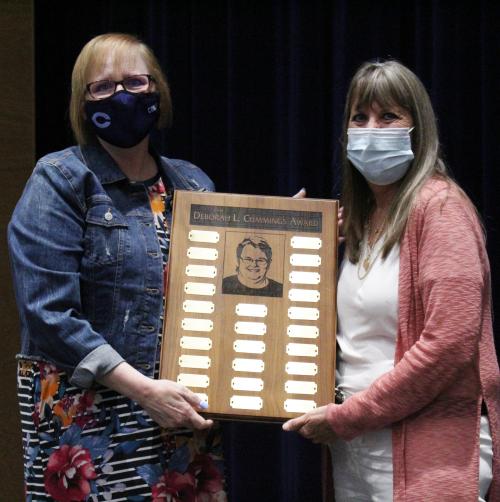 In the last year of Debbie’s career, she was diagnosed with terminal cancer. The illness took a toll but she never wanted to quit coming to work. After a hospital stay she went to half days so she could still see ‘her kids’ daily. She worried about “her kids” and didn’t allow them to ever go hungry. Her final request was that her Memorial Funds be used to feed children with negative meal balances.

“Her dedication was very admirable and appreciated by many. That attitude was what inspired the creation of the Deborah ‘Debbie’ Cummings Award,” said Superintendent Kellen Adams. “This award goes to any USD 413 employee, regardless of position, who displays the qualities that Debbie embodied while she was part of the Chanute School District family.”

Named as the 2021 recipient of the Deborah Cummings Award is Chanute High School Secretary Karen Graham.

Karen has worked at CHS since 2003 and during that time her roles have extended far beyond that of a typical front office secretary.  She continues to serve as is the Student Government Sponsor, has worked with National Honor Society, the school’s Blood Drive, Junior Prom, and organizing Ecology Day.

With her ready smile and quick laugh, Karen Graham sets an example for how to build relationships, and she does it with students, teachers and staff and has often been called an employee’s “best friend.”

Besides being a good listener and unofficial counselor, she works relentlessly behind the scenes to instill community service within the hearts of the students by creating and promoting service projects both inside the building and out in the community.

Karen Graham exhibits all the qualities good employees have: strong work ethic, a genuine care for students, a positive attitude, is helpful, supportive and has a desire to improve the district, Adams said, as Karen, at left in the photo above, was presented the award by 2020 recipient Pat Summervill.