After three days of carefully choosing words and crafting sentences, 30 parents, community members, business leaders and educators learned and used strategic thinking skills during Chanute Public Schools' strategic planning retreat. Through the process, a vision began to emerge and out of that vision, a mission statement reflecting community values and beliefs was developed.

The school board approved contracting with Cambrian Group, Montgomery, Ala., to guide the steering committee and subsequent groups in creating a strategic plan for its future. 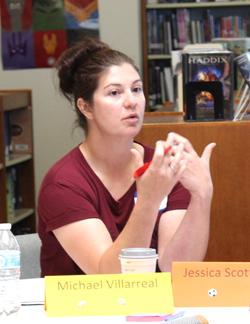 “All successful organizations have a strategic plan,” Superintendent Kellen Adams pointed out. “It effectively drives every decision you make by the common shared vision” of all those in the school district, a business or hospital.

It lays the foundation for a business to fulfill its mission, said school board president Jeff Caldwell, General Manager of Bridgewood Cabinetry.

“Bridgewood cabinetry's strategic plan sets direction for the organization by outlining goals and acts as our road map to go from where we are today to where we want to be five years down the road,” Caldwell said. “Our strategic plan is used so that our team knows and understands where it is going thereby empowering the staff to make good decisions about what must be done right now, next week, next month, next year and so on, to succeed.”

This plan will put the school district on a course to follow, Adams said, and “provide guidance or direction on how to allocate district resources, dollars and staff.” 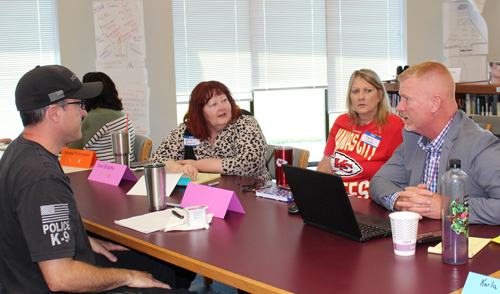 “When there is a strategic plan, no matter the changes that take place in district or building leadership, the plan is still in place,” Adams explained. “It creates consistency for the district and eliminates changes due to leadership changes.”

It was important to involve the community in the strategic planning process, which will be ongoing through November.

“Great communities have great school systems because they are inseparable,” Caldwell said. “Strategic planning input from the community helps us to see and understand where we need to go, how are we going to get there and what does success look like.  We are all one big team working together to continually deliver on our student’s first philosophy.”

In the first of three days with the Cambrian Group facilitator, the steering committee talked about their fundamental beliefs about Chanute Public Schools. Those belief statements led to creating a new mission statement that was on its fifth revision by day two.

“This guy is really good,” she said. “He makes you think. He doesn’t answer the questions for you.”

Working in groups of four or five, the committee members created lists of the school district’s strengths and weaknesses.

Soft spoken but direct, Cook outlined the process for sharing those lists.

A spokesperson would read the list with limited explanation. Those listening could ask for clarifications, but not offer opinions or solutions. They were to mark any duplicates off their own lists.

By the time the third group had shared their strengths, some common themes emerged, such as empowering staff through professional development, a forward thinking administration, caring teachers and front office staff, and a student’s first philosophy.

“We’ve seen much of this before. That’s a good thing,” Cook commented, and then asked, “What do you mean by a forward thinking?”

District leadership is not afraid of change or to try something new, someone responded. USD 413 has a reputation for pursuing innovative research-based programs, said another, often being the first rather than the last to try new programs or methods.

From another group, Principal Don Epps said there is a lack of controversy in the district, at least since he’s been principal at Royster. 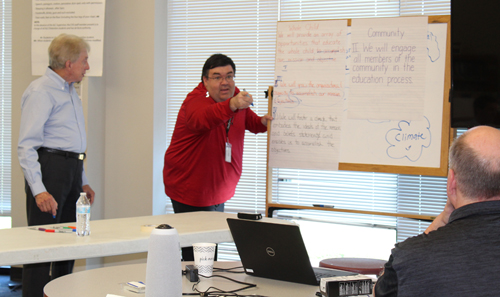 “The best show on Monday night is not at the Board of Education meeting,” Epps said, and that’s not true at every school district.

The lists of district weaknesses generated multiple questions and clarifications.

Other groups mentioned lack of transparency, the district’s relationship with the ANW Special Education Cooperative, and the inability to attract substitute teachers as weaknesses.

On day three, Cook directed the groups to take the comments and create objectives, then establish parameters and eventually create some strategies, which he defined as “major initiatives we need to take to complete and close that gap from where we would be and want to be.”

The work of the steering committee then passed to potential action team leaders who were trained by Cook in strategic thinking and how to lead action teams. The leaders are tasked with building teams of at least 15 members who will develop action plans around seven identified objectives coming from the planning committee.

The teams will meet twice a month from August through October to develop their plans and take a first draft before the strategic planning committee in November.

“Our goal is to have a fully developed action plan to place in front of the Chanute Board of Education by December for approval, and in front of the entire education staff for implementation in January,” Maring said.