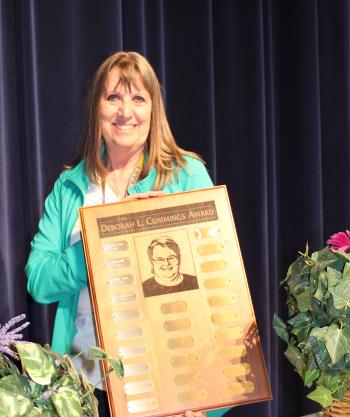 At the end of every school year, one employee of Chanute Public Schools is selected for a special award named after the late Deborah “Debbie” Cummings.

Cummings began working for Chanute Public Schools in the Hutton kitchen and eventually became the Kitchen Manager at Chanute Elementary. She believed in the district’s Student’s First motto and exemplified it in her attitude, dedication and the pride she took in feeding the students of Chanute. She expected the same of all her kitchen staff if they wanted to work for her.

In the last year of Debbie’s career she was diagnosed with terminal cancer. The illness took a toll but she never wanted to quit coming to work. After a hospital stay she went to half days so she could still see ‘her kids’ daily. She worried about “her kids” and didn’t allow them to ever go hungry. Her final request was that her Memorial Funds be used to feed children with negative meal balances.

“Her dedication was very admirable and appreciated by many. That attitude was what inspired the creation of the Deborah ‘Debbie’ Cummings Award,” said Superintendent Kellen Adams. “This award goes to any USD 413 employee, regardless of position, who displays the qualities that Debbie embodied while she was part of the Chanute School District family.” 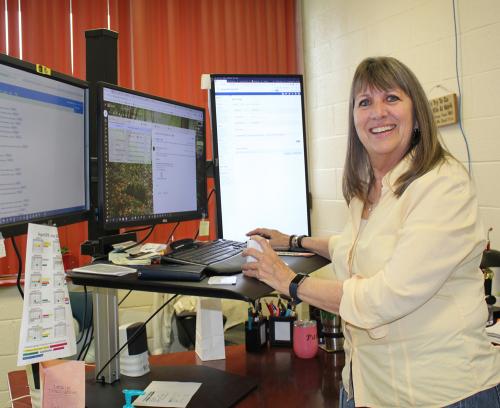 The nominee should be someone who exhibits all the qualities that good employees should have: strong work ethic, genuine care for students, a good co-worker, positive attitude, desire to improve the district, be helpful and supportive, Adams continued.

This year’s recipient is Pat Summervill, a longstanding staple in the district whose official title is database administrator but who is often referred to as the PowerSchool or data queen.

“I have witnessed first-hand her dedication to USD 413 and her strong work ethic,” said technician Janice Erikson. “She has worked in many capacities over the years to serve the needs of our students, staff and administration.”

“Pat has a ‘don’t stop’ work ethic and won’t leave for the day until her daily to-do list is done. That isn’t easy, between all the calls and emails she gets, but she is a pro at multi-tasking,” said Terri Markham.

When the phone rings in Summervill’s office – as it frequently does - it’s because there is a problem. On an easy day, it could be a keycard that doesn’t work, a printer refusing to recognize a teacher’s code, or enrollment information not showing up for a new student. On a bad day, it’s finding incorrect data that’s prohibiting uploads to the state, the nightly updates didn’t process correctly or arriving at work to find the phones are down.

“Other districts call her for advice and info on how to do reports in PowerSchool and issues with uploading or importing data. She loves helping people. If she doesn’t have an answer she will find one for them, again going above and beyond.  That is just who she is,” Markham said.

She’s a problem solver. She won’t let go of a problem until she figures out why something is not working.

“I have worked with Pat in the same department for over 20 years,” Erickson said. “The Deb Cummings award was started for employees such as Pat.”