When the school district decided to get bids to tear down the 1930 structure where generations of football players had tackled and track teams had run relays, local farmer and business owner Jim Kepley decided this was something he could do for Chanute.

“I just really wanted to do it. It’ll be a Kepley thing,” he said Wednesday as a team of workers including his brother, Mike Kepley, and nephew Nick Kepley, took the towers of lights down that surrounded the grass field and track.

Jim Kepley wasn’t an athlete when he was in school. He didn’t play sports but watched his friends who did.

“I’ve lived here all my life. I was a fat kid from the east side of the tracks,” he said. “I wasn’t picked last in dodge ball. I was second to last. The guy that was last was absent.”

Tearing down the stadium, though, this was something he could do and do right. Kepley wanted the job and K & W Oil Well Services was awarded the bid for $57,500. The closest bid to him was $30,000 higher.

“This is his cup of tea and what he can give back to his community,” said Desiree Kepley, as she watched her husband guide the lowering of a tower to the ground Wednesday.

When the Chanute Community Sports Complex was built on 35th Street, the former home for the Blue Comets and Royster Rockets became a practice facility for the middle school football and track teams and a walking track for PE classes and the public.

Recognizing that many people in the community continued to use the former track as a place to walk or “get their steps,” the Chanute-USD 413 Board of Education looked for a solution to repurpose the area. 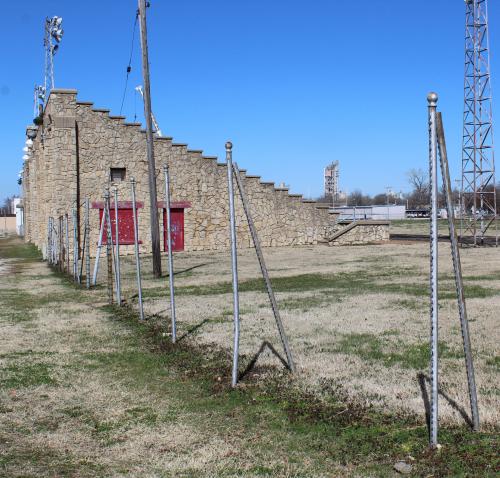 “Our intent is to demo the actual structure of the stands and the press box, but not the track and practice field because we believe there’s still value and purpose in those,” USD 413 Superintendent Kellen Adams said.

Adams and Julie Aikins, retired teacher who oversees the Blue Cross Blue Shield Community Pathway Grants for Chanute, worked together to create a combined space that would improve health for those in the schools and the community.

“The cool thing about Royster stadium is it’s right on our bike route,” established with a community policy pathways grant, Aikins said, and it’s only half a block from Highland Park which is also connected to the bike route.

The school board approved a policy statement for the site, designating in writing that the track and field can be used by the community as well as the schools. That allowed them to apply for a Pathways grant, which, if approved, will help fund the cost to resurface the track, which is not in good shape.

“I was excited about it,” Aikins said. “I think it’s a creative solution to providing a different opportunity for Chanute citizens to be active. It will really be a community asset.”

The track is adjacent to residential area, the park and industry. Even industry employees could walk across the street to use the track at lunch, before or after work, she added.

Both Adams and Kepley are cognizant of the years of memories Chanute residents have from the Friday nights and spring afternoons at the former stadium. They have created a plan so that residents, who want, can pick up a piece of rock or stone from the structure after it has been demolished and the area is safe.

Demolition could begin as early as Monday, Kepley said. When that happens, his crew will create a pile of stone debris from which community members can take home a piece of the old stadium. If the pile runs, low he’ll add to it as needed.

It may be a few days before that pile is safely accessible. When it is, notices will be sent to local media and posted on the USD 413 Facebook pages, so people will know where and when the stadium rock can be picked up.

When demolition begins, the road to the west of the stadium will be closed. The Kepleys aren’t sure how much rebar is in the concrete structure, which affects how it will come down or whether they’ll need to take the 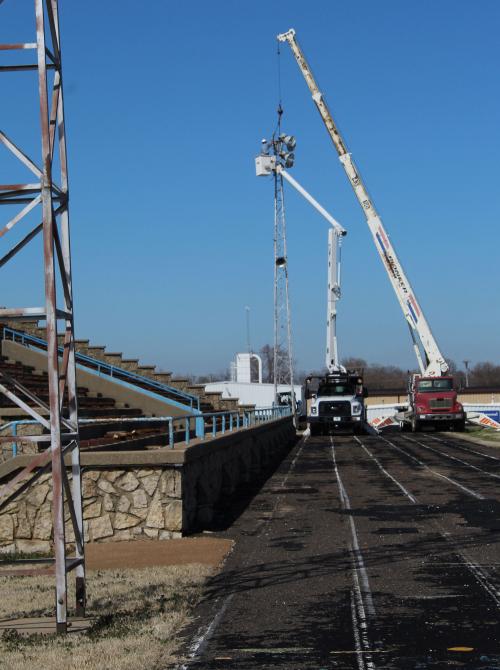 “We just want it to be a safe situation,” Desiree said. That doesn’t mean people can’t stop by and watch the process from a safe distance. In fact, an ideal place would be across the street on the south, she added.

Some former coaches shared memories of the facility that has served its purpose.

Bruce Jackson said he was impressed with Royster stadium when he came to Chanute.

“I came from a small community and played on a field that had no stadium,” he recalled. “When I started coaching in a rural community in north central Kansas, they had no stadium. Coming here and playing in a stadium like that I thought was real neat. I’d never experienced that.”

Jackson coached his first game for Royster in 1979 and later became the CHS football coach through 1985.

Though Royster stadium was similar to what other communities in this area had, it was a step up for Jackson with more people at the games, and a real scoreboard.

“The big rock stadium, that was just pretty unique,” former coach Kent Frazell added. “It’s stayed intact for all these years. The way they built things back then was second to none.”

His fondest memories are of coaching football at Royster stadium on game nights.

“The stadium was so close to the field. (It) was so intimate, the crowd and the teams were so close together you could almost hear everything. It was electric in the fact that everything was amplified because everyone was in close proximity,” Frazell said.

The stadium did come with extra duties for the coach and assistants.

“One of the things that went along with the job was to water the grass,” and it was a manual system back then, Jackson said. “You didn’t want it to dry up and die over the summer. Sometimes we had to replace parts of it (but) I think we did a pretty good job.”

“The parking wasn’t very good around the stadium,” Jackson recalled, but everybody knew that and adjusted to that. “The old stadium leaked at times when it rained. Nobody complained. We made do with what we had.”

“I think it served its purpose for the time,” Jackson said

“I’m really happy they’re going to retain the walking track. It’s good for the community, if nothing else just to go out there walk around and remember what it stood for,” Frazell said.