Students celebrate farm to table nutrition with Crunch Off 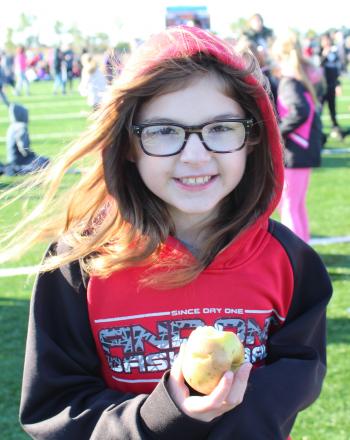 With a bite into nearly 2,300 apples Wednesday morning, Chanute Public School students, staff and administrators officially entered the “Crunch Off” competition among nine Mountain Plains states in the Midwest. The event was organized through KSDE school food service programs to support National Farm to School Month.

Students from Colorado to North Dakota, south to Kansas and east to Missouri competed to see which one could get 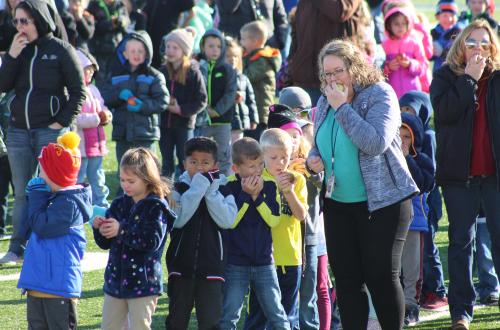 the most “crunches” into a local apple. Terri Markham, director of Child Nutrition and Wellness for USD 413, suggested that Chanute Public Schools participate and school administrators jumped on board to organize the event at the Chanute Community Sports Complex.

“I wanted the kids to realize how much the farmers impact our daily food and to thank the farmers for what they do so that we have food on our plates,” Markham said.

With fresh apples that Markham purchased from Pome on the Range orchards at Williamsburg, KS, school employees and preschoolers through seniors each ate an apple to encourage healthy eating and support local agriculture in Kansas. 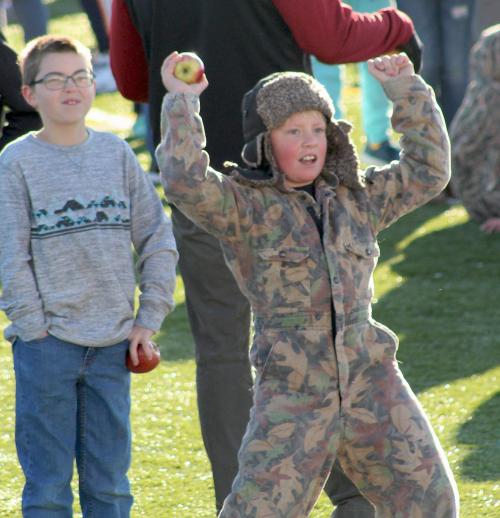 The event began at 8:05 a.m. when Royster students began boarding buses to take them to the stadium. About 30 minutes later CHS students walked across the parking lot as Chanute Elementary students began arriving, each taking an apple from the cases at the west gate and finding their spot on the football field yard lines. With music blasting from the press box, students kept the beat by jumping, wriggling, swaying and gyrating, which also served to keep them warm.

At the signal, everyone crunched into their apple in celebration.

“It went great,” Markham said when it was over.

Thanks to all the staff members who helped orchestrate this event, from custodian Mike Golay who carted the apples around, and Rusty Emling for providing the music, to Don Epps for organizing the “standing chart” on the field, Markham and Pat Summervill for making sure each child got an apple, everyone in transportation and all the teachers for getting their students on and off the buses and dancing with them on the field, to the patient Royster staff whose students were first to the stadium and last to leave. A shout out to Dave Ports for picking up the apples on a “no school” day, Zack Murry as stadium overseer and CHS teacher Caleb Wood for flying the drone.